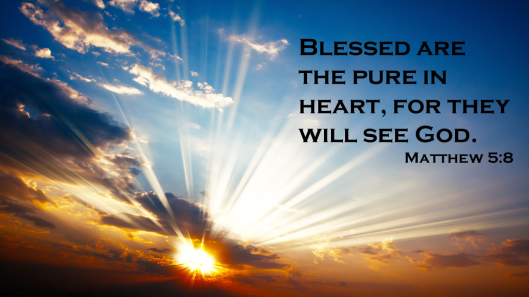 On this Good Friday, we are nearing the end of our journey through The Seven Deadly Sins and the Seven Beatitudes. On this day, Jesus bore excruciating pain and death on the Cross to free us from slavery to sin. Thank Him today for the free gift of salvation. Isaiah prophesied about the Suffering Servant, Jesus, whose mission was to free us from sin and death…

But He was wounded for our transgressions,

He was bruised for our iniquities;

The chastisement for our peace was upon Him,

And by His stripes we are healed. Isaiah 53:5

Lust is a disordered desire for sexual pleasure, where sexual pleasure is “sought for itself, isolated from its procreative and unitive purposes.”[1] Lust reduces a person with inherent dignity to an object used for one’s own selfish pleasure. St. John Paul II said this about lust…

The heart has become a battlefield between love and lust. The more lust dominates the heart, the less the heart experiences the nuptial meaning of the body. It becomes less sensitive to the gift of the person, which expresses that meaning in the mutual relations of man and woman.

Man as a person is “the only creature on earth that God has willed for its own sake” and, at the same time, he is the one who “can fully discover his true self only in a sincere giving of himself”(Gaudium et spes, §24). Lust in general—and the lust of the body in particular—attacks this “sincere giving.” It deprives man of the dignity of giving, which is expressed by his body through femininity and masculinity. In a way it depersonalizes man, making him an object “for the other.” Instead of being “together with the other”—a subject in unity, in the sacramental unity of the body—man becomes an object for man, the female for the male and vice versa.[2]

In simple terms, lust uses another person whereas love makes oneself a sincere gift for the good of the other.

Create in me a clean heart, O God, and put a new and right spirit within me. Psalm 51:10

“The most important thing to know about lust,” says Peter Kreeft in his book Back to Virtue, “is how to avoid it.”[3] This takes nothing short of supernatural grace. St. Paul tells us…

Wretched man that I am! Who will rescue me from this body of death? Thanks be to God through Jesus Christ our Lord! Romans 7:24-25

Lust will not be conquered by trying harder. In humility, we need to admit to God our powerlessness and beg Him for the grace to overcome it.

Kreeft also invokes the intercession of the Blessed Virgin Mary in conquering lust. He quotes a beautiful “Akathist Hymn used by the Eastern rite churches…[where the]…Virgin Mary is hailed a hundred beautiful ways in this hymn, including this one: ‘Hail, Tenderness conquering all desire.’[4]”[5] Mary, most pure of heart, is a powerful resource in this battle.

Our greatest joy is knowing God, the source of life. Worldly pleasures can never fill the God-sized hole in our hearts. Kreeft says, “remember Saint Thomas’ [Aquinas] diagnosis of lust… ‘Man cannot live without joy; therefore when he is deprived of true spiritual joys it is necessary that he become addicted to carnal pleasures.’” Kreeft adds, “The deepest passion of the soul is meant for God.”[6]

Indeed, we live as human beings, but we do not wage war according to human standards; for the weapons of our warfare are not merely human, but they have divine power to destroy strongholds. We destroy arguments and every proud obstacle raised up against the knowledge of God, and we take every thought captive to obey Christ. 2 Corinthians 10:3-5 (emphasis added)

Which brings us back to the Beatitude, “Blessed are the pure in heart, for they will see God” (Mt. 5:8). “This beatitude answers two questions,” says Kreeft: “What is our ultimate end? and What is our means to that end?”[7] “Seeing God is our end, our home,”[8] he says, and Jesus is the way. Only Jesus will give us purity of heart. St. Paul tells the Corinthians that “For our sake he made him to be sin who knew no sin, so that in him we might become the righteousness of God” (2 Cor 5:21).

“God’s single solution to all our problems is Jesus Christ,”[9] says Kreeft. “All our evils, spiritual and physical, sins and consequent sufferings, are due to our lack of purity of heart.”[10] “The most important question about purity of heart is the practical question, how do we get this priceless pearl? The answer, of course, is by God’s grace, that is, by Christ.”[11]

And how do we know Christ? It is though daily Scripture readings, particularly the New Testament Gospels of Matthew, Mark, Luke, and John, that we will come to know Jesus’ purity of heart. Spend time with Jesus; get to know Him. Ask Him, and His Blessed Mother, to transform your heart into His Sacred Heart so that you may sincerely give yourself to your spouse.

This is the ninth installment in our Lenten series on virtue. The previous reflections can be found at the links below:

Living Virtue Well in Our Marriages and Families

[4] The Akathist Hymn to the Theotokos, internet: https://www.holyannunciation.org/Liturgical%20Texts/IME-IMEe-Akathist%20Hymn.htm (accessed April 9, 2020).