fidelity, fruits of the spirit, holiness, procreation, Sacrament of Matrimony

Saints John Chrysostom, Augustine of Hippo, and Thomas Aquinas have exerted an enormous influence on Christian thinking, writing and theology. They are included among the Doctors and Saints of the Church, in recognition of their outstanding teaching, orthodoxy and holiness of life. Although the writings of each cover many subjects, we share their insights on marriage.

St. John Chrysostom (347-407) is regarded as the greatest orator and biblical commentator of the Eastern Church. The name “Chrysostom” means “gold mouth,” given to him because of his outstanding preaching skills. Chrysostom is one of the greatest apologists of Christian marriage. He expounded that God ordained marriage primarily to promote holiness of the husband and wife and secondarily to produce children.

Here is St. John Chrysostom’s advice to young husbands on how to treat their wives…

END_OF_DOCUMENT_TOKEN_TO_BE_REPLACED

Tomorrow, July 12th, is the Feast Day of Saints Louis and Zélie Martin, the parents of St. Thérèse of Lisieux, the “Little Flower.” In October 2015, they became the first couple to be canonized together as husband and wife.

Blessed Louis and Marie Zélie Guerin Martin were married on July 12, 1858. The couple had nine children, but four of them died in infancy. All five of the surviving children, including St. Thérèse, entered religious life, highlighting the important role parents play in their children’s human and spiritual upbringing. Zélie Martin died of cancer in 1877, at the age of 45; her husband died when he was 70 in 1894.

Fr. Antonio Sangalli, vice postulator for the cause for the canonization of the couple, said, “Louis and Zélie demonstrated through their lives that conjugal love is an instrument of holiness, a way to holiness consummated by the two persons together.” He noted that this aspect today is “the most important aspect to value in the family. There is an enormous need for a simple spirituality lived out in daily life.”

END_OF_DOCUMENT_TOKEN_TO_BE_REPLACED

Today the Church celebrates the Feast of Blessed Pier Giorgio Frassati, who St. John Paul II called “The Man of the Beatitudes”[1] and a “living witness and courageous defender of hope on behalf of the young Christians of the twentieth century.”[2]

Pier Giorgio Frassati was born in Turin, Italy on April 6, 1901, the son of Alfredo and Adelaide Frassati. Pier Giorgio’s father owned the anti-Fascist Italian newspaper La Stampa and was influential in Italian politics, holding positions as an Italian Senator and Ambassador to Germany. His mother was an artist.

Neither of his parents were particularly pious, in fact, his father was an agnostic. But his mother saw to it that he and his sister Lucia received the sacraments. Consumed by their own interests and activities, his parents were unaware of the deep faith and spiritual movement in Pier Giorgio’s heart and mind, and his love for Jesus.

At an early age, Pier Giorgio joined the Marian Sodality and the Apostleship of Prayer. He obtained permission to receive daily Communion, which was rare at that time. He assisted at daily Mass, received Holy Communion, and spent much time in intense personal prayer after Mass. He also had special devotion to the Blessed Mother. His intense spiritual life moved him to action. At 17, he joined the St. Vincent de Paul Society to serve the sick and needy. Like his father, He also became a political activist. But instead of following the steps of his father, he chose to pursue a civil engineering degree, much to his father’s disappointment.

END_OF_DOCUMENT_TOKEN_TO_BE_REPLACED

St. Peter tells us that we are made holy through “obedience to the truth” (1 Pet 1:22). Unfortunately, in today’s culture, each individual decides what is true and these many “truths” conflict with each other. What is the ultimate guide for moral truth?

St. John Paul II in his classic encyclical Veritatis Splendor (The Splendor of Truth), says: “Only God, the Supreme Good, constitutes the unshakeable foundation and essential condition of morality.” He goes on to say that only “upon this truth is it possible to construct a renewed society and to solve the complex and weighty problems affecting it.”[1] Society today simply has lost its bearings and moral compass.

John Paul II identified the spread of a devious political movement that aims to rob the dignity and authentic freedom of the person in following the moral authority of God almighty.

END_OF_DOCUMENT_TOKEN_TO_BE_REPLACED

Father’s Day is celebrated in the United States on the third Sunday of June. It is a day to celebrate fatherhood, paternal bonds, and the influence of fathers in society, especially in the foundation of society, the family.

The Church holds up St. Joseph as the model and exemplar of fatherhood. In Joseph’s marriage to Mary, God ushers in the sacrament of the New Covenant. St. John Paul II in his apostolic exhortation Redemptoris Custos (On the Person and Mission of Saint Joseph in the Life of Christ and of the Church), speaks of how God used Mary and Joseph to break the curse of original sin ushered in by Adam and Eve…

END_OF_DOCUMENT_TOKEN_TO_BE_REPLACED

First, in the spring of 1916, the Angel of Peace spoke these words to the three children of Fatima: “The Hearts of Jesus and Mary are attentive to the voice of your supplications.”

Again in the summer of 1916, the Angel says: “The Holy Hearts of Jesus and Mary have merciful designs for you.”

Finally, in the fall of 1916, the angel dictates a prayer to the children which in part says: “And I draw upon the infinite merits of the Sacred Heart of Jesus and the Immaculate Heart of Mary that You might convert poor sinners.”

In addition, on several occasions, Jesus told Sister Lucia that He desired adoration of both hearts.

END_OF_DOCUMENT_TOKEN_TO_BE_REPLACED

Today the Church celebrates the Solemnity of Corpus Christi, the Real Presence of Jesus Christ in the Holy Eucharist – His Body, Blood, Soul, and Divinity. Did you know that marriage is an image of the Holy Eucharist?

Pope Benedict XVI, in his book The Spirit of the Liturgy, describes how God’s covenant with His people Israel images the union of man and woman in marriage:

The election of Israel…appears as the love story of God and his people. The covenant is expounded through the analogy of betrothal and marriage, as the binding of God’s love to man and of man to God. Thus human love was able to serve as a profoundly real analogy of God’s action in Israel.[1]

He further describes how the Eucharist parallels the union of man and woman in marriage:

END_OF_DOCUMENT_TOKEN_TO_BE_REPLACED 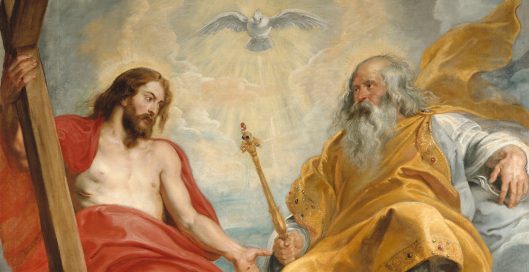 Despite this longstanding doctrine or belief, the Trinity, according to the Catechism of the Catholic Church “is a mystery of faith in the strict sense, one of the ‘mysteries that are hidden in God, which can never be known unless they are revealed by God’” (237). So how can we better understand this mystery and live it out in our marriages and families?

END_OF_DOCUMENT_TOKEN_TO_BE_REPLACED

Today the Church celebrates the Feast of Pentecost when Holy Spirit descends on Mary, the Apostles, and other disciples of Jesus, just as He promised before His Ascension.

So when they had come together, they asked him, “Lord, will you at this time restore the kingdom to Israel?” He said to them, “It is not for you to know times or seasons which the Father has fixed by his own authority. But you shall receive power when the Holy Spirit has come upon you; and you shall be my witnesses in Jerusalem and in all Judea and Samar′ia and to the end of the earth.” And when he had said this, as they were looking on, he was lifted up, and a cloud took him out of their sight. Acts 1:6-9 (emphasis added)

Jesus’ promise of the Holy Spirit was not just for His Apostles and disciples in the Upper Room. He continues to pour out His Spirit upon us and His Church today. He is also sending us out on mission to preach the Gospel of His saving work on the cross. He has equipped us with the Holy Spirit who will guide us in all knowledge and truth; “the Counselor, the Holy Spirit, whom the Father will send in my name, he will teach you all things” (Jn 14:26).

END_OF_DOCUMENT_TOKEN_TO_BE_REPLACED

Depending on where you live in the United States, the Feast of the Ascension of the Lord occurs on the Thursday of the Sixth Week of Easter (40 days after Easter) or is transferred to the Seventh Sunday of Easter. This feast commemorates Jesus’ triumphant ascension into heaven. It is a foreshadowing of our own ascension to heaven.

“Let not your hearts be troubled; believe in God, believe also in me. In my Father’s house are many rooms; if it were not so, would I have told you that I go to prepare a place for you? And when I go and prepare a place for you, I will come again and will take you to myself, that where I am you may be also. John 14:1-3

This is our hope and our assurance. Jesus also promises to send us the Holy Spirit to lead us in all truth.