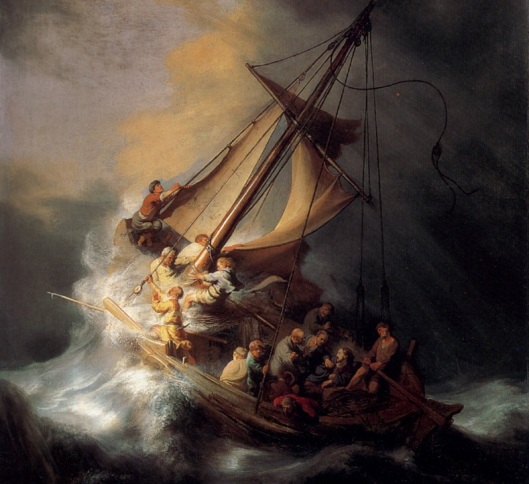 After barreling across the Caribbean, Hurricane Matthew, the most powerful storm to threaten the Atlantic coast in more than a decade has left death and devastation in its wake. The World Meteorological Organization, described the storm as “one big, bad beast.” The storm hit Florida this past Thursday night, heading north along the eastern seaboard. Hundreds of thousands homes and untold lives have been ripped apart by the storm.

A different kind of storm has been ripping through marriages and families. Satan, the “big, bad beast” hates marriage and savagely wreaks devastation and destruction wherever he can. Marriage is supposed to be an image of Christ’s unending love for His Bride, the Church. By distorting marriage and family life, Satan distorts our image of the all loving, merciful and compassionate God. Thankfully, we do not have to weather the inevitable storms in marriage on our own. God has sent His Son to help us and guide us at all times, particularly through the storms of life.

And when he got into the boat, his disciples followed him. And behold, there arose a great storm on the sea, so that the boat was being swamped by the waves; but he was asleep. And they went and woke him, saying, “Save, Lord; we are perishing.” (Mt 8:23-25)

The principal issue in this story is not the “one big, bad beast” of a storm. The issue is one of trust, whether or not we are trusting Jesus to bring us through the storms that inevitably come in life. This Gospel account of the calming of the storm begs the question: do we trust in Jesus for his protection and care even when He does not appear to be paying attention to our needs?

The Psalms are full of Israel’s desperate cries for God’s protection, deliverance and mercy. The Israelites thought that God had His eyes closed to their plight and had shut His ears to their cries for help. Just as God sustained Israel from destruction and defeat in the desert, Jesus will sustain, protect and deliver us from the storms that can ravage our homes and families.

And he said to them, “Why are you afraid, O men of little faith?” Then he rose and rebuked the winds and the sea; and there was a great calm. And the men marveled, saying, “What sort of man is this, that even winds and sea obey him?” (Mt 8:26-27)

Nothing can stand in the way of Jesus! There is no storm in your life that Jesus cannot overcome. Jesus is bigger than any strife in your family. Jesus is bigger than loneliness, infidelity, bitterness, anger or fear of divorce. Jesus’ calming of the storm showed His disciples that their safety and destiny is under His command and nothing can stand in the way of His grace. This same grace is available to you in the midst of the storms crashing around your marriage and family. Place your trust in Jesus and in Him alone. His grace will calm the storms.

And when he came to the other side, to the country of the Gadarenes, two demoniacs met him, coming out of the tombs, so fierce that no one could pass that way. And behold, they cried out, “What have you to do with us, O Son of God? Have you come here to torment us before the time?” Now a herd of many swine was feeding at some distance from them. And the demons begged him, “If you cast us out, send us away into the herd of swine.” And he said to them, “Go.” So they came out and went into the swine; and behold, the whole herd rushed down the steep bank into the sea, and perished in the waters. (Mt 8:28-32)

Two truths about Jesus are revealed in this story. First, Jesus commands and the demons obey. The demons recognize Jesus as the “Son of God.” He is superior to them; they have no power to stand against Him. The second truth is that the demons seek to destroy. The demon-possessed men were naked, out of their minds, self-destructive, living amongst the dead, and isolated from the rest of the world. The ultimate end to the herd of pigs shows us that no matter how alluring or seductive the demonic world may be, it will lead to destruction.

Husbands and wives are leaving children and spouses to find happiness in other relationships. They are captives of Satan, being lured into illicit activities that will never bring the happiness they promise. These spouses have been allured into living amongst the dead, out of their minds, self-destructive, and isolated from the ways of God. These wayward spouses are in need of our prayers to release the demons living in them. We all have a responsibility to pray for these marriages that are under attack. Jesus’ crucifixion on Calvary brought the war with the demonic world to a head. For three days, it appeared that the demons had destroyed God’s plan for His people. But with Jesus’ triumphant resurrection, the demonic forces were defeated for all times. Jesus is Lord! He has the power to defeat every enemy. Our ultimate victory is guaranteed in Jesus!

For the Lord God helps me; therefore I have not been confounded; therefore I have set my face like a flint, and I know that I shall not be put to shame; he who vindicates me is near. Who will contend with me? Let us stand up together. (Isa 50:7-8)

Jesus has defeated the demonic forces in this world. Together, let us place our trust in Him to defeat the forces seeking to destroy families. Jesus has defeated the foe and He will not allow Satan to disgrace us or put us to shame. May we all pray together that He will rescue all struggling marriages from the storms of sin and division.