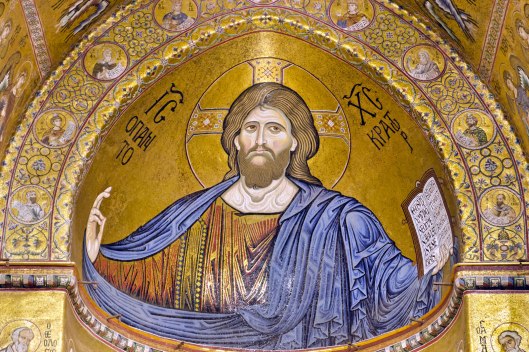 Today is the Feast of Christ the King and the last Sunday of the Liturgical year. Next Sunday, we begin the new Liturgical year with the season of Advent. It is worthwhile to reflect on this feast and what it means our families in the new year.

When we are baptized, we are anointed to share in the priestly, prophetic, and royal offices of Jesus Christ. It is relatively easy for us to understand Jesus’ role as priest. He intercedes for and offers sacrifice for the people of God. He gave God glory by laying down His life willing for our salvation. Like Him, we are called to give our whole life over to God the Father in gratitude and complete trust.

However, it is difficult for us to relate to Christ as king. Most of us have a poor image of kings because they tend to be self-serving, enslaving their subjects. Christ on the other hand, is a servant-leader. He epitomizes the biblical view of kingship which has three primary responsibilities:

The Catechism of the Catholic Church explains what this teaching truly signifies.

The People of God shares in the royal office of Christ. He exercises his kingship by drawing all men to himself through his death and Resurrection. Christ, King and Lord of the universe, made himself the servant of all, for he came “not to be served but to serve, and to give his life as a ransom for many.” For the Christian, “to reign is to serve him,” particularly when serving “the poor and the suffering, in whom the Church recognizes the image of her poor and suffering founder.” The People of God fulfills its royal dignity by a life in keeping with its vocation to serve with Christ. (CCC 786, emphasis added)

Jesus is the only real king. He is King of Kings, ruler of the universe. As King, He came to earth, born of a Virgin, to fight for us. He did not send legions of angels to do battle with evil but He came Himself to go to war for us. He came to get His hands dirty, bloody in fact, on the cross. He came to free us from the stranglehold of sin and death. He liberates, defends, and protects us from the evil one who wants to destroy us.

Christians are not called to be kings in the negative, overbearing sense of the word, but to be true “servant-leaders,” walking in the footsteps of Jesus Christ. We need to protect the dignity of every human being, in particular the unborn, the sick, and the elderly. We are to feed the hungry, cloth the naked, and care for the grieving. In short, we are to focus on the needs of those around us and not on our own needs. We need to be Christ to others.

As husbands and wives, mothers and fathers, we need to image Christ’s kingly office in our families and neighborhoods. We need to pray every day for the Holy Spirit to open our eyes to truly see the needy in our midst, especially those closest to us. In seeing their need, we need to exercise our authority and do something to meet their needs. In doing so, we will be the light of Christ in the world, carrying on His mission to further the Kingdom of God.

God bless you, dear brothers and sisters in Christ.