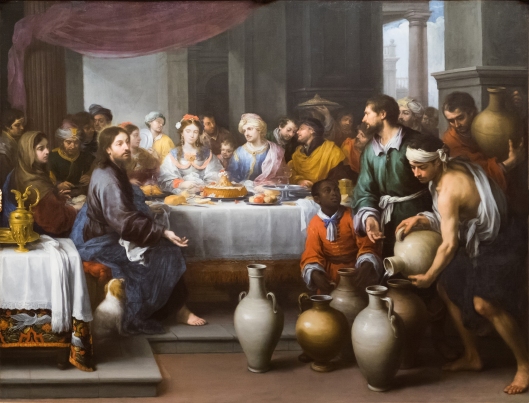 The Gospel reading for today, the Second Sunday in Ordinary Time, recounts the Wedding Feast at Cana where Jesus turns water into wine. To understand the significance of Jesus performing His first miracle at a wedding feast let’s look first at the creation of man and woman in Genesis, the first chapter of the Bible.

Then the Lord God said, “It is not good that the man should be alone; I will make him a helper fit for him.” So out of the ground the Lord God formed every beast of the field and every bird of the air, and brought them to the man to see what he would call them; and whatever the man called every living creature, that was its name. The man gave names to all cattle, and to the birds of the air, and to every beast of the field; but for the man there was not found a helper fit for him. So the Lord God caused a deep sleep to fall upon the man, and while he slept took one of his ribs and closed up its place with flesh; and the rib which the Lord God had taken from the man he made into a woman and brought her to the man. Then the man said,

“This at last is bone of my bones
and flesh of my flesh;
she shall be called Woman,
because she was taken out of Man.”

Therefore a man leaves his father and his mother and cleaves to his wife, and they become one flesh. Genesis 2:18-24

Marriage is not a human institution; it was created by God for the good of man and woman. He knows what will ultimately make us happy. It is by putting Jesus Christ at the center of our lives and marriages, that we will be given the graces to live out this vocation. The Catechism of the Catholic Church (CCC) explains:

“The intimate community of life and love which constitutes the married state has been established by the Creator and endowed by him with its own proper laws … God himself is the author of marriage.” (Gaudium et Spes, 48 §1). The vocation to marriage is written in the very nature of man and woman as they came from the hand of the Creator … “The well-being of the individual person and of both human and Christian society is closely bound up with the healthy state of conjugal and family life” (Gaudium et Spes, 47 §1). CCC, 1603

Tapping into God’s Grace: Lessons from the Wedding Feast at Cana

If we take a close look at the biblical account of the wedding feast at Cana, we can learn three important lessons:

The Wedding at Cana

On the third day there was a marriage at Cana in Galilee, and the mother of Jesus was there; Jesus also was invited to the marriage, with his disciples. When the wine failed, the mother of Jesus said to him, “They have no wine.” And Jesus said to her, “O woman, what have you to do with me? My hour has not yet come.” His mother said to the servants, “Do whatever he tells you.” Now six stone jars were standing there, for the Jewish rites of purification, each holding twenty or thirty gallons. Jesus said to them, “Fill the jars with water.” And they filled them up to the brim. He said to them, “Now draw some out, and take it to the steward of the feast.” So they took it. When the steward of the feast tasted the water now become wine, and did not know where it came from (though the servants who had drawn the water knew), the steward of the feast called the bridegroom and said to him, “Every man serves the good wine first; and when men have drunk freely, then the poor wine; but you have kept the good wine until now.” This, the first of his signs, Jesus did at Cana in Galilee, and manifested his glory; and his disciples believed in him. John 2:1-11

Lesson One: Marriage is a Sacrament

The first lesson from Cana is that marriage is a sacrament. And what is a sacrament? According to the Catechism of the Catholic Church: “sacraments are efficacious signs of grace, instituted by Christ and entrusted to the Church, by which divine life is dispensed to us” (CCC, 1131).

On the threshold of his public life Jesus performs his first sign—at his mother’s request—during a wedding feast. The Church attaches great importance to Jesus’ presence at the wedding at Cana. She sees in it the confirmation of the goodness of marriage and the proclamation that thenceforth marriage will be an efficacious sign of Christ’s presence. CCC, 1613 (emphasis added)

God gives us grace in marriage for two purposes:

“By reason of their state in life and of their order, [Christian spouses] have their own special gifts in the People of God.” This grace proper to the sacrament of Matrimony is intended to perfect the couple’s love and to strengthen their indissoluble unity. By this grace they “help one another to attain holiness in their married life and in welcoming and educating their children.” CCC, 1641 (emphasis added)

God grants grace to perfect your love for your spouse and to strengthen your unity.

The second lesson we learn from the Wedding Feast of Cana is that God wants to pour abundant grace upon your marriage.

Wine symbolizes joy. Jesus made an overabundance of wine. Six stone jars each holding 20 to 30 gallons. That is 120 to 180 gallons of wine! That’s a lot of wine. God desires to pour out His grace even more abundantly upon you.

The Catechism states that…

Christ is the source of this grace … Christ dwells with them, gives them the strength to take up their crosses and so follow him, to rise again after they have fallen, to forgive one another, to bear one another’s burdens, to “be subject to one another out of reverence for Christ,” (Eph 5:21) and to love one another with supernatural, tender, and fruitful love. In the joys of their love and family life he gives them here on earth a foretaste of the wedding feast of the Lamb. CCC, 1642

The Catechism further explains that…

Jesus has not placed on spouses a burden impossible to bear … By coming to restore the original order of creation disturbed by sin, he himself gives the strength and grace to live marriage in the new dimension of the Reign of God. It is by following Christ, renouncing themselves, and taking up their crosses that spouses will be able to “receive” the original meaning of marriage and live it with the help of Christ. This grace of Christian marriage is a fruit of Christ’s cross, the source of all Christian life. CCC, 1615 (emphasis added)

With the help of God’s grace, our marriages can be all that God originally intended them to be. But how do we receive this grace?

To answer that question, let’s take another look at the Scriptural account of the Wedding Feast at Cana.

His mother said to the servants, “Do whatever he tells you.” Now six stone jars were standing there, for the Jewish rites of purification, each holding twenty or thirty gallons. Jesus said to them, “Fill the jars with water.” And they filled them up to the brim. John 2:5-7 (emphasis added)

Mary’s words to the servants are still true today. We are to do whatever Jesus tells us. It is through obedience to the commands of God that abundant joy and grace will be poured out into your marriage.

May your marriage be blessed so that you may be a blessing to your children and the world.