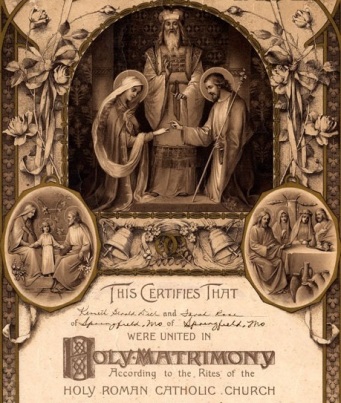 The affirmation of marriage and the family has long been a concern of the Church. It this day and time, there is much confusion as to what constitutes a marriage. Marriage is a divine institution. The Second Vatican Council stated “the intimate partnership of life and the love which constitutes the married state has been established by the Creator and endowed by him with its own proper laws…For God himself is the author of marriage.”[1]

The Code of Canon Law further defines this:

The matrimonial covenant, by which a man and a woman establish between themselves a partnership of the whole of life and which is ordered by its nature to the good of the spouses and the procreation and education of offspring, has been raised by Christ the Lord to the dignity of a sacrament between the baptized.[2]

In this one sentence, the Church set up the charter for marriage. It is chock full of insights into what constitutes marriage. Let’s look deeper into this important text.

It begins with matrimonial covenant. Previous versions of the Canon of the Church used the term “contract” in describing marriage. In a contract there is a fundamental equality between the two parties entering into it. They enter into the contract freely and without imposition or coercion. The rights and duties of the parties are mutual and in using this language, the Church was given some authority to regulate and enforce the contract. However, there is one fundamental flaw to contracts, that is, people sometimes break their word and walk away from the agreement.

A covenant is an elevated form of a contract. In a covenant, even if one of the parties breaks the contract, the other party honors the terms. God sets forth the first covenant in the Old Testament with Noah, “I will establish my covenant with you” (Gen 6:18). God further defines the covenant with Abraham, “the Lord made a covenant with Abram, saying, ‘To your descendants I give this land, from the river of Egypt to the great river, the river Euphra′tes’” (Gen 15:18) and “I will establish my covenant between me and you and your descendants after you throughout their generations for an everlasting covenant, to be God to you and to your descendants after you” (Gen 17:7).

However, God’s chosen people ignored the covenant and like a wayward spouse, sought out and worshipped other gods. In spite of their infidelity, God still honored His covenant, wooing them and seeking after them like a faithful husband. God always loved this people and was willing to take them back if they repented of their sins.

Next, we see that this covenant is established between a man and a woman. God has endowed marriage with certain essential attributes, without which marriage cannot exist. The Church has taught through the ages that marriage is an exclusive relationship between one man and one woman. We see that this union is a partnership of the whole of life. Once validly entered and consummated, it gives rise to a bond that cannot be dissolved by the will of the spouses. The Code of Canon Law explains:

The essential properties of marriage are unity and indissolubility, which in Christian marriage obtain a special firmness by reason of the sacrament.[3]

Marriage thus created is a faithful and unbreakable covenant between the spouses that lasts until death. Jesus’ words in Scripture stress this immutable point…

And Pharisees came up to him and tested him by asking, “Is it lawful to divorce one’s wife for any cause?” He answered, “Have you not read that he who made them from the beginning made them male and female, and said, ‘For this reason a man shall leave his father and mother and be joined to his wife, and the two shall become one’? So they are no longer two but one. What therefore God has joined together, let not man put asunder.” Matthew 19:3-6

Next, we see that the man and woman establish between themselves the marriage covenant. It is not imposed on them by the priest or deacon but it is their mutual gift of themselves exclusively and permanently to each other. Their consent must be freely given.

Continuing on in the definition of marriage in the Canon, we see marriage is ordered by its nature to the good of the spouses and the procreation and education of offspring. In marriage, the husband and wife perfect one another, cooperating with God in the generation and rearing of new lives. In his encyclical Casti Connubii (On Christian Marriage), Pope Pius XII further developed the Church’s understanding of the ends of marriage, defining the foremost responsibility of husband and wife in marriage:

For all men of every condition, in whatever honorable walk of life they may be, can and ought to imitate that most perfect example of holiness placed before man by God, namely Christ Our Lord, and by God’s grace to arrive at the summit of perfection, as is proved by the example set us of many saints.

This mutual molding of husband and wife, this determined effort to perfect each other, can in a very real sense, as the Roman Catechism teaches, be said to be the chief reason and purpose of matrimony, provided matrimony be looked at not in the restricted sense as instituted for the proper conception and education of the child, but more widely as the blending of life as a whole and the mutual interchange and sharing thereof.[4]

Thus, the principle end of marriage is the mutual assistance of spouses in growing in holiness with the goal of reaching heaven.

Finally, we see that the marriage covenant has been raised by Christ the Lord to the dignity of a sacrament. It is through their sacramental bond that the husband and wife receive the grace they need to live virtuously in marriage. In our culture today, marriage has been stripped of its sacramental grace and is nothing more than a romantic relationship recognized by the state. Without grace, it is impossible to live marriage focused on the good of the other, forming ourselves into the image of Christ. We are sinful and selfish beings; only through the transforming grace of Jesus Christ can husbands and wives love each other with a sacrificial love.

And as Pius XI said: “By the very fact, therefore, that the faithful with sincere mind give such consent, they open up for themselves a treasure of sacramental grace from which they draw supernatural power for the fulfilling of their rights and duties faithfully, holily, persevering even unto death.”[5]

Christ raised the institution of marriage, between two baptized persons, to a sacrament not only as a means of sanctifying grace for the husband and wife but also as a representation of the union of Christ and His Church:

For no man ever hates his own flesh, but nourishes and cherishes it, as Christ does the church, because we are members of his body. “For this reason a man shall leave his father and mother and be joined to his wife, and the two shall become one flesh.” This is a great mystery, and I mean in reference to Christ and the church Ephesians 5:29-32

These blessings – unity, fidelity, indissolubility, the procreation of children and sacramental grace for the baptized – are the inseparable and fundamental essentials of marriage.

[1] Gaudium et Spes (Constitution on the Church in the Modern World), §48.