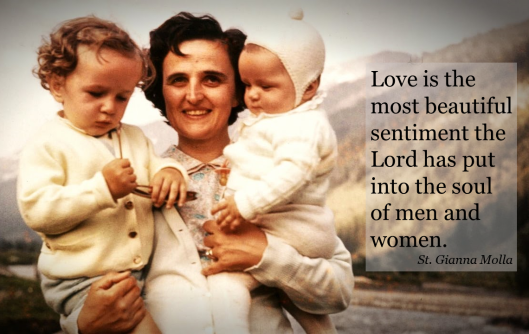 Gianna Beretta Molla was a pediatric physician, a wife, and a mother. She was born in Magenta, Italy on October 4, 1922. She was the 10th of 13 children in her family. Shortly before her marriage to Pietro in 1955, she sent him a letter that included the above quote. It tenderly speaks of the love that St. Gianna had for her husband and family. Gianna’s life demonstrates a self-sacrificial love, a love that gives for others without counting the cost. It is a love modeled on the love of Jesus Christ, the Son of God, who came into the world to die for our sins. He gave His life as a ransom for ours so we might inherit eternal life with His Father in heaven.

In the first four years of their marriage, the Mollas had three children: Pierluigi, Mariolina, and Laura. Two more pregnancies followed but ended in miscarriages. Early in her sixth pregnancy, doctors discovered that Gianna had both a child and a tumor in her uterus. The doctors recommended that Gianna have either an abortion or a hysterectomy to save her life.

Neither of these choices were acceptable to Gianna as they would have killed her child. Instead, she made the heroic choice to have the tumor removed, the option with the best chance of saving the life of her unborn child. She made this choice with full knowledge that her own life would still be at risk. In April 1962, Gianna Emanuela was born but post-operative complications resulted in her mother’s death.

St. John Paul II in his homily for the Canonization of St. Gianna, said:

The extreme sacrifice she sealed with her life testifies that only those who have the courage to give of themselves totally to God and to others are able to fulfill themselves.[1]

In the Vatican II encyclical Gaudium et spes (Pastoral Constitution on The Church in The Modern World), Pope Paul VI proclaimed that “Man…cannot fully find himself except through a sincere gift of himself (GS, 24). These words are echoed in the writings of St. John Paul II on marriage and family…

Love consists of a commitment which limits one’s freedom – it is a giving of the self, and to give oneself means just that: to limit one’s freedom on behalf of another. St. John Paul II, Love and Responsibility

In his Apostolic Exhortation Amoris Laetitia (On Love in the Family), Pope Francis reiterates that self-giving love is the essence of married love:

Ultimately, marriage reveals divine love, “a love manifested in the total self-gift of Jesus Christ, who even now lives in our midst and enables us to face together the storms of life at every stage.[2]

Self-giving love is the heart of the family. Ask Christ to be the center of your marriage. Strive to outdo each other in meeting your spouse’s needs.