breakdown of the family, secularism 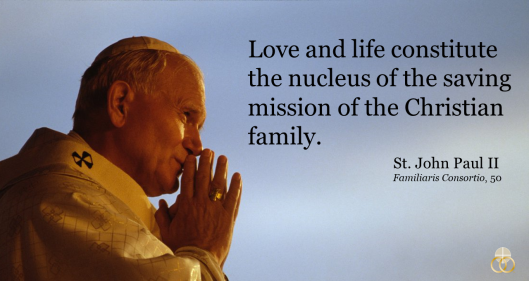 We live in a time when there is confusion as to what constitutes a marriage. St. John Paul II pinpointed the heart of the tragedy of the breakdown of the family: “the eclipse of the sense of God and man, typical of a social and cultural climate dominated by secularism” (Veritatis Splendor, 21). Secularism in the Western world worships egotistical individualism which places the needs and desires of an individual person above those of the society and even the family. It is “my needs, my wants, my pleasure” at the expense of what is best for the good of society as a whole.

As a society, we should be horrified by the exponential rise in violent crime that is the result of the breakdown of the traditional family:

David Blankenhorn, author of Fatherless America, has examined two seismic changes in the wedding vows which tell us a lot about our culture’s understanding of marriage. Most new vows do not include the words “till death do us part.” Marriage is just a contract that can be broken whenever either partner is not having their needs met. The second change that Blankenhorn noted is that the old vows conformed the couple to God’s plan for marriage. New vows are now written by the couple, indicating the intent to conform society to their definition of marriage.[4] In the Scripture account of creation, “God said, ‘Let us make man in our image, after our likeness…So God created man in his own image…male and female he created them’” (Gen 1:26, 27). Sadly, today man has turned that around, saying “Let us make god in our image, after our likeness.” This has had a catastrophic effect on marriage and families.

As a society, the sexual revolution and the decline in the traditional family has been an utter failure leaving broken individuals and families in its wake. Self-medication and unbridled pursuit of sexual pleasure is not providing the promised happiness that so many desire. People are longing to love and be loved but are left unsatisfied. God has placed that desire in the human heart. St. Augustine pined “our hearts are restless till they find rest in Thee” (Confessions, Book 1). Only in abiding in God’s plan for our lives and marriage, will we find the true joy and happiness that we so deeply desire.

Thankfully, there is a way to reverse the societal effects of the breakdown of the family. It is to return to the God-given truths about marriage and family life.

God Himself is the author of matrimony, endowed as it is with various benefits and purposes. All of these have a very decisive bearing on the continuation of the human race, on the personal development and eternal destiny of the individual members of a family, and on the dignity, stability, peace and prosperity of the family itself and of human society as a whole. Gaudium et Spes, 48

Individuals, families, and society as a whole benefit from traditional marriage as given to us by God Himself. Healthy and holy families have as their mission to guard, reveal, and communicate love. Moreover, Catholic teaching holds that marriage of two baptized persons is “raised to the dignity of a Sacrament [by Christ]…expressing the ‘great mystery’ of Christ’s nuptial love for his Church (Eph 5:32)” (John Paul II, Novo Millennio Ineunte, 47).

Finally, St. John Paul II, in his Apostolic Exhortation Familiaris Consortio, spoke of the precious value of marriage and of the family:

Illuminated by the faith that gives her an understanding of all the truth concerning the great value of marriage and the family and their deepest meaning, the Church once again feels the pressing need to proclaim the Gospel, that is the “good news,” to all people without exception, in particular to all those who are called to marriage and are preparing for it, to all married couples and parents in the world.

The Church is deeply convinced that only by the acceptance of the Gospel are the hopes that man legitimately places in marriage and in the family capable of being fulfilled.

Willed by God in the very act of creation, marriage and the family are interiorly ordained to fulfillment in Christ and have need of His graces in order to be healed from the wounds of sin and restored to their “beginning,” that is, to full understanding and the full realization of God’s plan.

At a moment of history in which the family is the object of numerous forces that seek to destroy it or in some way to deform it, and aware that the well-being of society and her own good are intimately tied to the good of the family, the Church perceives in a more urgent and compelling way her mission of proclaiming to all people the plan of God for marriage and the family, ensuring their full vitality and human and Christian development, and thus contributing to the renewal of society and of the People of God.[5]

It is tantamount that families not just survive but thrive so that they are a beacon of light in a world darkened by sin to Christ’s love and mercy. This is the vocation to which you have been called. Live out this mission faithfully and fruitfully for the glory of God.