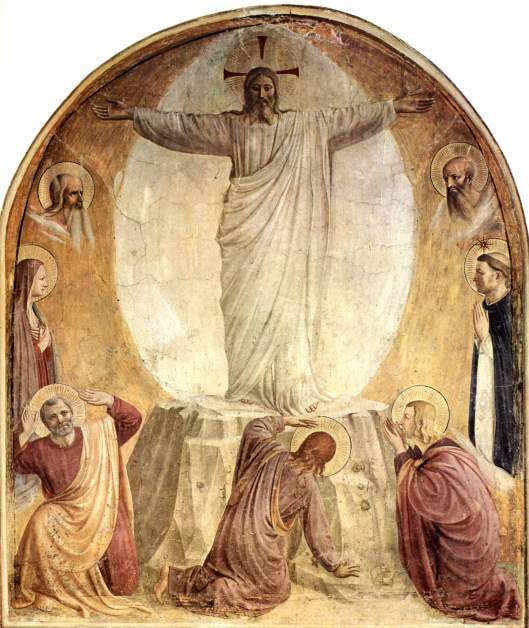 Just prior to the Transfiguration, Jesus foretells his death and resurrection:

And he began to teach them that the Son of man must suffer many things, and be rejected by the elders and the chief priests and the scribes, and be killed, and after three days rise again. And he said this plainly. Mark 8:31-32

Peter rebuked Jesus that such a thing should happen to Him. Jesus in turn rebuked Peter sternly, “Get behind me, Satan! For you are not on the side of God, but of men” (Mk 8:33). The disciples wondered amongst themselves what these words could possibly mean.

To encourage His closest disciples before His impending death, Jesus led Peter, James, and John up to the top of a high mountain where He was transfigured before them (see Mk 9:2-8). Jesus had just predicted His death and now is revealing His glory. Moses and Elijah are there representing all of the law and the prophets. Then from a cloud enveloping them, God speaks “This is my beloved Son; listen to him” (Mk 9:7).

This Gospel is telling us that we all are moving toward transfiguration. It testifies that the passion leads to the glory of the resurrection. The Transfiguration also reveals who we are to become, a transformed contagious Christian, conformed to Jesus’ glorified body. This encounter with Jesus happens at every Mass.

Abraham was asked by God to do the impossible – to sacrifice his son. He did not withhold his son but willingly offered him up to God in obedience. In doing so, he received him back (see Gen 22:1-19). This is a foreshadowing of God offering up His Only Son. God matches Abraham’s sacrifice and magnifies it by amazing proportions!

In the Mass, we bring the gifts – bread and wine and our lowly bodies – forward. We ask God to transform them. When the bread and wine are transformed into the Body, Blood, Soul, and Divinity of Jesus they are given back to us. Through Jesus’ sacrifice, we stand before God transformed and He declares us “not guilty!”

We need to take our transformed bodies into the world to be Christ for others. We cannot do this on our own strength but thanks be to God, we are strengthened to do so in the Body and Blood of Jesus.

Abbot Jeremy Driscoll’s homily can be viewed in its entirety here.

Abbot Jeremy Driscoll is in charge of the Mount Angel Abbey in Oregon. He teaches at the Mount Angel Seminary and the Pontifical University of Sant’ Anselmo, Rome. Abbot Jeremy’s Mission was based on his book What Happens at Mass.