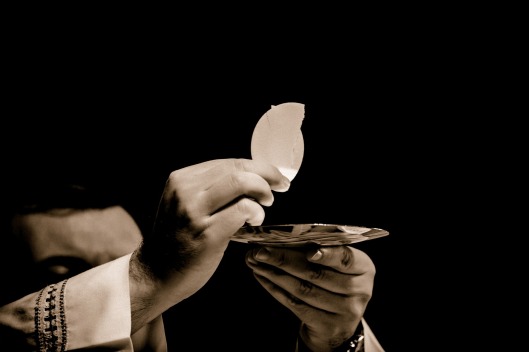 In response to Archbishop Allen Vigneron’s request in his recent pastoral letter Unleash the Gospel, to provide “opportunities for families to encounter Jesus anew, grow daily as His disciples, and give witness to the power of His mercy,” we have undertaken a study of what happens in the Mass.

Pope Benedict XVI at his January 11, 2012 general audience explained that the Eucharist is “the apex” of all Christian prayers. He stressed the need for proper preparation for receiving the Eucharist, especially the Sacrament of Penance. Pope Benedict called the Eucharist “the food of pilgrims” and “a source of strength” for those who are “tired, weary and disoriented.”

With this in mind, we offer the third in our series based on the Parish Mission at Our Lady of Good Counsel in Plymouth, Michigan given by Abbot Jeremy Driscoll, OSB, “The Mass: Supreme Encounter with God in Jesus.”

In Part I, we looked at the first part of the Mass, The Liturgy of the Word. These are not merely words but ultimately God’s action, what He has done for us. God’s words are His deeds. He is enacting His words in the assembly at Mass.

In Part II, we looked at the second part of the Mass: The Offertory and Eucharistic Prayer. The whole rest of the Mass is our response to the Word. We saw how God is now acting more deeply in the Mass: God is speaking, God is acting, and God is conforming us to His Body by what Jesus has done on the cross.

Today, we reflect on the third part of the Mass, the Communion and Concluding rites.

The Communion Rite is comprised of four parts: The Lord’s Prayer, Sign of Peace, Breaking of Bread, and Distribution. During this rite, we are joining our prayer with the prayer of all the angels and saints in heaven. We are literally experiencing “heaven on earth” during this part of the Mass.

Here we can pray this prayer deeply because Jesus gives us His own relationship with the Father. The priest begins by saying, “We dare to say…”

“Thy will be done” – God wills that all will be saved.

“Give us this day our daily bread” – We dare to ask God for the Eucharist.

“Forgive us our trespasses as we forgive those who trespass against us” – How do we forgive others? We are not capable of forgiving but we have Jesus praying this in us. This is communion; it begins here.

“Lord Jesus Christ who said to your apostles, ‘Peace I leave you, my peace I give you’” – Jesus says this on the night before He dies. He does not say “Peace!” again until He first appears to His disciples after His resurrection.

Jesus comes to us in the assembly with this same peace and unity. This too is communion. This is a prerequisite to being in union with God.

The “Breaking of the Bread” is one of the oldest names for the Eucharistic celebration. This keeps the symbolism of one loaf feeding many (see Mt 14:13-21). In the priest saying, “Eat of it,” we too are eating of one loaf in unity: “we who are many are one body, for we all partake of the one bread” (1 Cor 10:17). The one bread is being broken so many can be fed.

The assembly then sings “Lamb of God, who takes away the sins of the world…” This gives reference to the vision of John in the Book of Revelation, “I saw a Lamb standing, as though it had been slain” (Rev 5:6). Jesus is the Lamb that was slain and is alive!

The priest now says, “Behold the Lamb of God…” He is literally saying, “Look at it!” This harkens back to when John was baptizing in the Jordan and “he saw Jesus coming toward him, and said, ‘Behold, the Lamb of God, who takes away the sin of the world!’” (Jn 1:29). The priest finishes by saying “Blessed are those called to the Supper of Lamb.” We are already in our future, the Supper of the Lamb in heaven.

Now the community forms a procession and comes forward to receive the Body and Blood of the Lord. In the same place where the bread and wine was originally brought forward, it is now handed back to us by the same hands that received it.[1]

The assembly answers with their “Amen!” – I accept it, I believe it, I will do it on the strength of His Body and Blood – signifying our covenant with God.

The priest proclaims “The Lord be with you” (remember this is code for starting a new part in the Mass). When Jesus first appeared to His disciples in the Upper Room on the day He rose from the dead, He said to them “‘Peace be with you. As the Father has sent me, even so I send you.’ And when he had said this, he breathed on them, and said to them, ‘Receive the Holy Spirit.’” (Jn 20:21-22).

This is “The Sending” that finishes every Mass. Jesus sends us with Himself into the world. He gives us His Holy Spirit to guide us to do good works and proclaim the Gospel.

This is the rhythm of the Mass, Sunday after Sunday. We are a redeemed people. Our future is in heaven, yet we still live in a fallen world. We will die without this! It is a precious gift that God has given to us. There is nothing more that can be given to the world than this. Jesus has given Himself entirely for us. We can give ourselves entirely because Jesus lives in us. “Go into all the world and preach the gospel to the whole creation” (Mk 16:15).

Abbot Jeremy Driscoll’s third talk of the Mission at Our Lady of Good Counsel Parish in Plymouth, Michigan can be viewed here.

Next week, we will we will finish this series on the Mass, with Abbot Jeremy Driscoll’s Parish Mission homily, “Transfiguration as Encounter.”