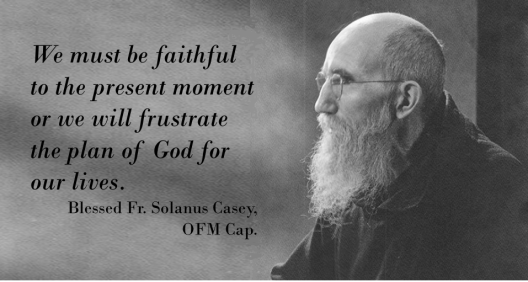 Venerable Solanus Casey, an American-born Capuchin priest who died in 1957, will be beatified November 18, 2017 in Detroit, Michigan. The Mass is expected to draw upwards of 70,000 people. Fr. Solanus Casey was known for his great faith, attention to the sick, and ability as a spiritual counselor.

This week we have the privilege of sharing with you a reflection by Cristin Woodsum on motherhood in light of the beatification of Fr. Solanus. Cristin and her husband Jon have nine children (two in heaven). They attend Our Lady of Good Council parish in Plymouth, Michigan where they are a fixture in the front pew. Cristin and Jon’s marriage makes present Christ’s love for His bride, the Church, giving witness to His self-sacrificial love.

Yesterday morning I was driving home from dropping off my oldest kids at school. At a stoplight I peeked into my baby’s car seat and saw my sweet little boy sleeping peacefully. Isaac’s deep breathing indicated that he was sleeping soundly; his tiny little head was tipped to the side with little bubbles coming out of his mouth. It was nothing short of adorable. It is an image that would melt anyone’s heart. But this tired mom’s heart sank. My six-month old was recovering from a nasty ear infection and hadn’t had any semblance of good sleep for days. Until now. In the car. On the way home. Experience told me that there was no way Little Man was going to stay asleep during the dreaded “transfer” from my van to his crib. If I wanted Isaac to get a solid and much-needed nap, I had to keep driving. It was 7:57 a.m. I drove until 9:53 a.m., when I pulled into my driveway and woke up my still sleeping baby.

To be clear, I spent one hour and 56 minutes driving around the Plymouth/Canton/Northville area (hat tip to the Panera drive-thru in Canton for fueling my three-year old and caffeinating yours truly). That is 116 minutes of doing…well, not much of anything, aside from submitting myself to the music requests shouted at me from my preschooler-turned-disc-jockey in the backseat.

Feeling sorry for myself, I started thinking about my husband. He was in Dallas for business doing Important Things.

I thought about my parents, who spend hours outside of abortion clinics praying. That’s an Important Thing.

I thought of a friend who is active in rescuing girls who are involved in human trafficking, clothing, feeding and housing them. Another Important Thing I wasn’t able to do.

I thought of another friend who is a lawyer and very active in protecting people and business leaders whose Catholic faith and dignity are being challenged by others. Yet another Important Thing someone else was doing.

Meanwhile, I was driving a 12-passenger van all over Wayne County because my six-month old needed a nap. To say I felt “little” would be an understatement. Still wallowing in self-pity, I called my husband, Jon, thereby interrupting him from doing Important Things, and informed him of my irrelevant morning, whereby the most exciting moment was that the latte maker at Panera accidentally put whipped cream on my coffee (silly barista!). I was just driving around. It was something that anyone could do. It didn’t take any particular skill or expertise. People do it all of the time, every day, but usually it is just a means to get to another place to do Important Things.

I told Jon I felt insignificant.

As any loving husband would do, he said something to the effect of, “Great job! Isaac needed a good nap! You’re a good mom!” He was piling on exclamation marks, and verbally patting me on the back. It was one affirmation shy of Stewart Smalley’s “You’re good enough, you’re smart enough, and doggone it, people like you!” He meant well, but it didn’t really speak to my heart.

I don’t remember much about what I was expecting before I arrived there. The Center is small, but very well kept. No one could be confused about its purpose: to introduce guests to a man that not only brought Jesus to others, but saw Jesus in every person he encountered. I hadn’t heard much about him, so I was intrigued.

Just past the entryway, there is a mini-museum sharing the life and ministry of Father Solanus. My family and I wandered around and learned about this simple man who had an extraordinary impact on his community. His upbringing was remarkably unremarkable. His dad was a farmer and Irish immigrant. He got average grades in school. Before entering seminary, he held jobs as a logger, a hospital orderly, a streetcar operator, and a prison guard. While in seminary, his superiors didn’t think he was capable of handling the duties of a regular priest. Consequently, he was ordained a “simplex priest,” meaning he couldn’t hear confessions or preach doctrinal sermons. In short, the powers-that-be perceived him as “not good enough” to be a regular priest. Because of that, he was unable to do Important Things that traditional priests do. He took his role in humble obedience. He thanked and gave glory to God in all he did, and didn’t focus on the things he wasn’t permitted to do. Instead, he turned every responsibility he had into an Important Thing.

One of Father Solanus’ jobs was being the porter of the monastery. It was his responsibility to answer the door whenever anyone visited. It was considered a pretty menial task and was often reserved for a first or second year friar. However, Father Solanus took that job as “The Doorkeeper” and rocked it out. He gave each person a warm welcome, giving the guest as much time as he needed. He listened. He prayed. He counseled. He gave them the gift of his time. In short, he was present.

Word of his attentiveness, encouragement and trust in God’s Providence spread throughout the Detroit community. Before long, there were long lines outside the monastery door. The people were coming to see the priest who wasn’t allowed to hear confessions, or preach on doctrine. Miracles were even attributed to him. Ponder that: this quiet, humble priest, who didn’t even have full priestly faculties, was performing miracles and attracting people who desperately craved hope, prayer and time. The irony of it all was that if Father Solanus had not been a simplex priest, he likely wouldn’t have had the opportunity to reflect God’s love to the many people that he was able to encounter by simply accepting his role and opening the door. To him, everyone on the other side of the door was an Important Thing; rather, a person with dignity who was loved by God and deserved an attentive, faithful friend.

Aren’t we all called to that, to see the sacred in the ordinary? Shouldn’t we all be present with those we meet, giving them the time, attention and patience that Jesus would give them? Imagine a world where we all joyfully give that gift to one another! The beauty in it is that you don’t have to have a certain job, or have a specific person in your contacts to give this gift of self to another. One can do this as a doctor, lawyer, dignitary, burger flipper, priest simplex, or…a mom. We all can turn seemingly insignificant deeds and encounters into Important Things. Nothing Father Solanus did was menial on an eternal level, despite the fact that none of those jobs and responsibilities ranked very high on a worldly level. But, the Catholic Church is holding up his life  – not the lives of his superiors, or his bishops – as an example of how we should live our own lives. No, the Church is honoring the man who was deemed “not good enough” to preach the doctrine, but most certainly knew how to live it in an extraordinary way.

That reminder of Father Solanus Casey’s vocation couldn’t have come at a better time. Yes, I knew motherhood was a vocation. But, in the chaos of the ordinary I had forgotten the sanctity of the ordinary. My mundane duties as a mom don’t keep me from doing Important Things, but they actually are the Important Things. If Isaac fell asleep in the van while Father Solanus was driving, he would rejoice at the opportunity to give the sick baby an occasion to catch up on much needed rest. He would thank the Lord, as he did in all things, and likely pick up his rosary and bond with his Heavenly Mother while he cruised around. He certainly wouldn’t wallow in the insignificance of his station in life. He would think that it was absolutely The Most Important Thing at that moment. I started to feel empowered at the opportunity to be present with my sick baby. He wasn’t getting in the way; he and my other children are the way, the way to my own sanctification. Further, it isn’t simply a lesson reserved for me, or just moms, but a message anyone can live anywhere. We are all called to bring the sacred to the ordinary, just as soon-to-be Blessed Solanus Casey did.

Thanks be to God for all His designs. Blessed Fr. Solanus Casey, OFM Cap.