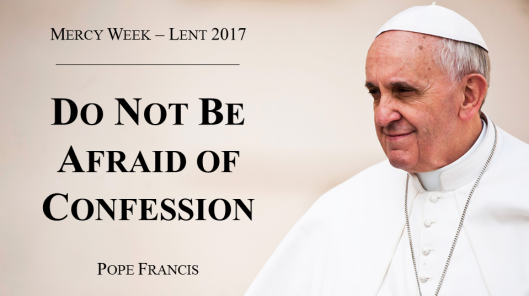 Confessing to a priest is a way of putting my life into the hands and heart of someone else, someone who in that moment acts in the name of Jesus… Pope Francis – 16 Jan 2016

For five weeks we have been reflecting on the passion and death of Jesus Christ. He suffered immensely for the forgiveness of our sins. He did it out of pure love for you and me. It is our prayer that this journey has helped you come to an understanding of the enormous price Christ paid for the forgiveness of your sins.

During this next week leading to Holy Week, which Pope Francis has called a “week of Mercy,” we suggest preparing for confession by examining the sins of your entire life. If you are like us, there are pages and pages of sins. The goal of this is NOT to have you feel bad about yourself. Rather it is to understand the great mercy of God. In spite of our great sinfulness, He loves us and wants us to dwell with Him for all eternity.

“How you are fallen from heaven, O Day Star, son of Dawn! How you are cut down to the ground, you who laid the nations low! You said in your heart, ‘I will ascend to heaven; above the stars of God I will set my throne on high; I will sit on the mount of assembly in the far north; I will ascend above the heights of the clouds, I will make myself like the Most High.’ But you are brought down to Sheol, to the depths of the Pit.” Isaiah 14:12-15

For one sin, Satan was cast from heaven. His sin was that he was outraged by God’s plan to divinize human creatures, “Let us make man in our image” (Gen 1:26). Satan was jealous that mere creatures would be raised to a higher level than him.

For one sin, Adam and Eve were cast from the Garden of Eden. They disobeyed God once and as a result of this sin, all generations are tainted by original sin.

In spite of our many sins, God loves us and wants us to be with Him. He sent His Son Jesus to die for our sins so that nothing stands in the way of spending eternity with Him in heaven. God condemns no one to hell; it is a free choice given to every creature.

Before a man are life and death, and whichever he chooses will be given to him. Sirach 15:17

God is faithful, by whom you were called into the fellowship of his Son, Jesus Christ our Lord. 1 Corinthians 1:9

Jesus is waiting for you. He wants to pour out His mercy on you. Go to confession and give all your past to Jesus. He nailed your sins with Him to the cross. Your sins are forgiven. Give Him thanks and praise for all that He suffered to set you free.