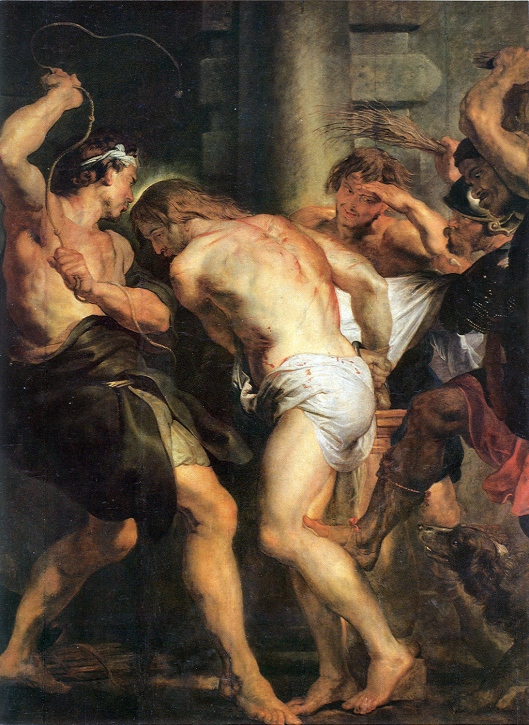 I have seen his ways, but I will heal him; I will lead him and requite him with comfort…Peace, peace, to the far and to the near, says the Lord; and I will heal him. Isaiah 57:18-19

During Lent, we are reflecting on Christ’s Passion, Death and Resurrection. Last week, we reflected on the Agony in the Garden. This week we will look at the scourging of Christ at the pillar.

And as soon as it was morning the chief priests, with the elders and scribes, and the whole council held a consultation; and they bound Jesus and led him away and delivered him to Pilate. And Pilate asked him, “Are you the King of the Jews?” And he answered him, “You have said so.” Mark 15:1-2

Lacking the authority to execute Jesus to death, the Sanhedrin handed Jesus over to Pontius Pilate, the Roman procurator of Judea. Pilate could find no wrong with Jesus yet viewed him as a threat to peace in the region. Today, there are individuals who lack the authority to end a marriage so they turn to the government to break the covenant that only God has the authority to break (Rom 7:2).

Pilate said to him, “So you are a king?” Jesus answered, “You say that I am a king. For this I was born, and for this I have come into the world, to bear witness to the truth. Every one who is of the truth hears my voice.” John 18:37

And Pharisees came up to him and tested him by asking, “Is it lawful to divorce one’s wife for any cause?” He answered, “Have you not read that he who made them from the beginning made them male and female, and said, ‘For this reason a man shall leave his father and mother and be joined to his wife, and the two shall become one flesh’? So they are no longer two but one flesh. What therefore God has joined together, let not man put asunder.” Matthew 19:3-6

Oh, that all the spouses who have deserted husbands and wives would hear these words and believe them to be true. Man cannot break that which is holy in the eyes of God. No judge on earth has the authority to condemn a marriage to death. May we return to this godly principle.

It is amazing that nothing has changed in 2000 years. Truth was obscured in the time of Jesus just as it is today. In today’s society, truth is defined by the individual. There is no absolute truth. But in the heavenly realm, there is absolute truth. God’s Word reigns supreme. Jesus was condemned to death as an innocent man because there was no absolute truth to guide the actions of his accusers. So it is today concerning the permanency of marriage. Individual views concerning the worthiness of the marriage guide decisions that will have eternal ramifications. God help us for our indifference to the sacrifice of families on the altar of self-fulfillment.

Pilate then called together the chief priests and the rulers and the people, and said to them, “You brought me this man as one who was perverting the people; and after examining him before you, behold, I did not find this man guilty of any of your charges against him; neither did Herod, for he sent him back to us. Behold, nothing deserving death has been done by him; I will therefore chastise him and release him.” But they all cried out together, “Away with this man, and release to us Barab′bas”—a man who had been thrown into prison for an insurrection started in the city, and for murder. Pilate addressed them once more, desiring to release Jesus; but they shouted out, “Crucify, crucify him!” A third time he said to them, “Why, what evil has he done? I have found in him no crime deserving death; I will therefore chastise him and release him.” But they were urgent, demanding with loud cries that he should be crucified. And their voices prevailed. So Pilate gave sentence that their demand should be granted. He released the man who had been thrown into prison for insurrection and murder, whom they asked for; but Jesus he delivered up to their will. Luke 23:13-25

Pilate, although he could find no grounds to condemn Jesus to death, gave in to the will of the people. Lord, please forgive us for succumbing to the demands of a society that views marriage as expendable. This is not a new issue but has been debated for thousands of years.

They said to him, “Why then did Moses command one to give a certificate of divorce, and to put her away?” He said to them, “For your hardness of heart Moses allowed you to divorce your wives, but from the beginning it was not so. And I say to you: whoever divorces his wife…and marries another, commits adultery.” Matthew 19:7-9

Jesus’ words on divorce and remarriage could not be clearer; it is not God’s will for couples to divorce and seek fulfillment in the arms of another. The offense is so serious that Jesus calls it a grave sin. God is not pleased with divorce.

Judah has been faithless, and abomination has been committed in Israel and in Jerusalem; for Judah has profaned the sanctuary of the Lord, which he loves, and has married the daughter of a foreign god. May the Lord cut off from the tents of Jacob, for the man who does this, any to witness or answer, or to bring an offering to the Lord of hosts! And this again you do. You cover the Lord’s altar with tears, with weeping and groaning because he no longer regards the offering or accepts it with favor at your hand. You ask, “Why does he not?” Because the Lord was witness to the covenant between you and the wife of your youth, to whom you have been faithless, though she is your companion and your wife by covenant. Has not the one God made and sustained for us the spirit of life? And what does he desire? Godly offspring. So take heed to yourselves, and let none be faithless to the wife of his youth. “For I hate divorce, says the Lord the God of Israel, and covering one’s garment with violence, says the Lord of hosts. So take heed to yourselves and do not be faithless.” Malachi 2:11-16

God hates divorce. He does not listen to the prayers of those who disobey their marital covenants. Oh, that we turn away from our selfish ways and honor God through our obedience to Him.

He was despised and rejected by men; a man of sorrows and acquainted with grief; and as one from whom men hide their faces he was despised, and we esteemed him not. Surely he has borne our griefs and carried our sorrows; yet we esteemed him stricken, smitten by God, and afflicted. But he was wounded for our transgressions, he was bruised for our iniquities; upon him was the chastisement that made us whole, and with his stripes we are healed. All we like sheep have gone astray; we have turned every one to his own way; and the Lord has laid on him the iniquity of us all. He was oppressed, and he was afflicted, yet he opened not his mouth; like a lamb that is led to the slaughter, and like a sheep that before its shearers is dumb, so he opened not his mouth. Isaiah 53:3-7

Christ was obedient to the Father’s will even to the point of death. Marriage can be tough at times. It is in the struggles spouses face together, that marriages are strengthened and grow in holiness. Join your sufferings with the sufferings of Christ in his scourging. Jesus bore the suffering for you so that you may be saved from your sins and healed of all you iniquities.

Then Pilate took Jesus and scourged him. John 19:1

There is no more poignant aspect of Christ’s passion than the scourging that He endured for our sins. We are not talking about a few lashes with a whip but an intensely brutal beating that nearly killed Jesus. Flogging was a legal precursor to Roman execution. They used short whip (flagrum), composed of several braided leather strips to which were tied small metal balls and sharp pieces of sheep bone. The metal balls would cause deep contusions, while the sheep bones and leather strips would cut into the skin and underlying muscle tissue. The beating would result in ribbons of flesh hanging from the body. The severe scourging and extensive blood loss would leave the victim in a weakened state of shock and near death.

But he was wounded for our transgressions, he was bruised for our iniquities; upon him was the chastisement that made us whole, and with his stripes we are healed. Isaiah 53:5

We are healed through the suffering of Christ. Bear any sufferings you may be experiencing as Christ did for all sinners. Pray to God for the healing of marriages that are suffering strife and brokenness. Be obedient to God in honoring your marriage vows even when it hurts. God will bring victory out of your pain. Trust your marriage to the loving care of the Father. He loves you and your spouse more than you can imagine!

But thanks be to God, who gives us the victory through our Lord Jesus Christ. 1 Corinthians 15:57

May you find peace in knowing that Christ suffered for the salvation of the world. By His stripes, may any wounds and brokenness in your marriage be healed for the glory of His name.

God bless you, dear brothers and sisters in Christ.

Next Week: The Crowning with Thorns