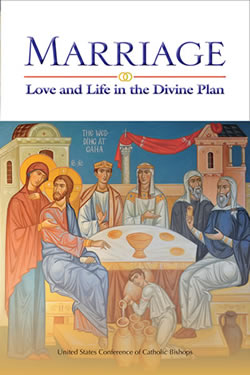 To assist in our ministry to married couples, we were looking for a succinct and clear book which would help couples understand the beauty, goodness and truth of God’s plan for marriage. The Pastoral Letter issued by the United States Conference of Catholic Bishops (USCCB), Marriage: Love and Life in the Divine Plan, aptly addresses this need.

In November 2004, the USCCB committed to promoting, strengthening and protecting marriage. They formed a National Pastoral Initiative for Marriage “in order to communicate from the riches of our Catholic faith the meaning and value of marriage and to offer support and practical assistance for it to flourish both in society and the Church” (57). This pastoral letter “is a sign of our continuing commitment and of the priority we have given to marriage in the evangelizing mission of our bishop’s conference” (57).

Society and the Church are built on the foundation of strong marriage and family life. Both St. Pope John Paul II and Pope Emeritus Benedict XVI “have emphasized that pastoral ministry in service of marriage and family life should be an urgent priority of the Church” (57). The bishops view this pastoral letter as “a foundation and reference point for the many works of evangelization, catechesis, pastoral care, education, and advocacy carried on in our dioceses, parishes, schools, agencies, movements, and programs” (57).

The bishops stressed the importance of marriage and family life with the following commitments:

The letter consists of four parts:

The Introduction describes marriage as a blessing bestowed by God from the creation of the human race, inscribed into the very nature of man and woman (see Gn 1:27-28, 2:21-24). Although the “first sin has ruptured the original communion between man and woman…the original blessing of marriage was never revoked” (1). Jesus Christ “restored the original blessing in its fullness [and] elevated it by making the marriage between baptized Christians a sacramental sign of his own love for the Church [see Eph 5:25-32]” (1-2).

The bishops are, however, troubled “that far too many people do not understand what it means to say that marriage – both as a natural institution and a Christian sacrament – is a blessing and gift from God” (2-3). They point out that “couples too often reflect a lack of understanding of the purposes of marriage…children are seen not as integral to a marriage but optional [and] view marriage as a mostly private matter, an individualistic project not related to the common good but oriented mostly to achieving personal satisfaction” (3).

The intent of the pastoral letter is “to be a theological and doctrinal foundation…a resource to help and encourage all those who are moving toward marriage, who are journeying in married life, and who are accompanying and assisting those who are called to the vocation of marriage” (4). It is “an invitation to discover, or perhaps rediscover, the blessing given when God first established marriage as a natural institution and when Christ restored and elevated it as a sacramental sign of salvation” (5).

Part One answers the question “What is Marriage?” It cites the definition found in the Catechism of the Catholic Church: “[marriage is] a lifelong partnership of the whole of life, of mutual and exclusive fidelity, established by mutual consent between a man and a woman, and ordered towards the good of the spouses and the procreation of offspring [CCC, 1601] (7). The Second Vatican Council, in the document Constitution on the Church in the Modern World (Gaudium et Spes, 48), says “for God himself is the author of marriage” (7).

The bishops stress that marriage “is the foundation of the family, where children learn the values and virtues that will make good Christians as well as good citizens…[highlighting] the importance of marriage for all society” (8). The bishops continue by saying that “conjugal love, the love proper to marriage, is present in the commitment to the complete and total gift of self between the husband and wife…a unique communion of persons through the relationship of mutual self-giving and receiving” (8). Male and female complementarity is essential to marriage for “God created man in his image, in the divine image he created him; male and female he created them [Gn 1:27]” (9).

The bishops state that “marriage has two fundamental ends or purposes towards which it is oriented, namely, the good of the spouses as well as the procreation of children” (11). The Church teaches that marriage is “both unitive and procreative, and that it is inseparably both” (11). The unitive aspect of marriage is best understood through St. Pope John Paul II’s theology of the body which “speaks of the human body as having a spousal significance…that the human body by its very nature signifies that we humans are directed to relationship” (12).

God has established marriage “so that man and woman could participate in his love and thus selflessly give themselves to each other in love” (12). God’s love is life-giving. Thus, marriage is “ordained not only to growing in love but to transmitting life” (13).

Part Two discusses how the natural institution of marriage described in Part One is raised by Christ to the dignity of a sacrament. Marriage is not only “crucial to society on a natural level, it is also crucial to the Church on the supernatural level” (29).

Marriage remains the good gift God created it to be although “original sin has had grave consequences for married life” (29). Men and women have been wounded by sin, selfishness has entered into their relationship and “marriage has become distorted” (29). Thankfully, marriage is restored to its original dignity and beauty by Christ’s sacrificial death on the cross. By raising marriage to a sacrament, Christ has renewed “the natural institution of marriage and elevates it so that it shares in a love larger than itself…nothing less than a participation in the covenant between Christ and the Church” (31).

Spouses, therefore, are fortified and, as it were, consecrated for the duties and dignity of their state by [this] special sacrament; fulfilling their conjugal and family role by virtue of this sacrament, spouses are penetrated with the spirit of Christ and their whole life is suffused by faith, hope and charity; thus they increasingly further their own perfection and their mutual sanctification, and together they render glory to God. (Gaudium et Spes, 48)

The Sacrament of Marriage equips the husband and wife with the graces needed to live out their vocation to marriage well. What a blessing from God!

The bishops go on to explain that “throughout history God has shown us his selfless love [through] the inner life of the Holy Trinity, a communion of persons, Father, Son, and Holy Spirit” (35). The Church herself “is a communion of persons that shares in God’s Trinitarian life and love” (35). Additionally, “married love not only is modeled on Trinitarian love but also participates in it [drawing] believers more deeply into the Trinitarian life of God” (35). Man and woman together, created in the image and likeness of God, “reflect the communal life of the Trinity…a communion that is both life-giving and loving” (36).

The bishops point out that the Trinitarian image in marriage and family life is also seen in a second way as “a married couple shares in this life-giving communion of love by together procreating children in the conjugal act of love” (37).

Marriage: Love and Life in the Divine Plan is a theologically dense and enlightening letter. The bishops of the United States are committed to promoting and supporting couples in living out their vocation to marriage and family life. The local Church and lay married couples need to be united in their pursuit of the vision laid out by the bishops. In the words of St. John Paul II, “the future of the world and of the Church passes through the family.”[i]