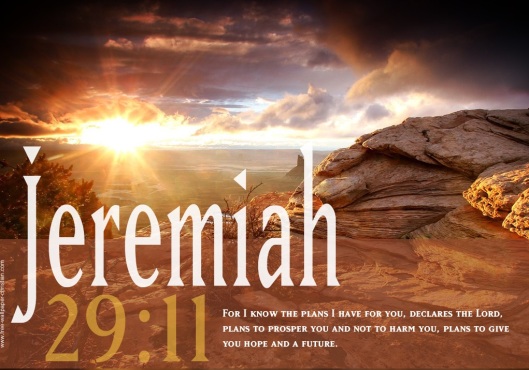 It was late in the summer of 2000. Dennis sat there in heavy traffic hoping that he would not be late. He was on the way to the hospital to meet with a group of doctors who were caring for his wife. What was supposed to be a four-day hospital stay had turned into four months. Dennis suspected that this special meeting with the doctors could only mean that his wife’s condition was becoming grave.

During that sad four months, God had reassured him with scripture after scripture that He was going to heal his wife of her illness. They prayed for a miracle, they prayed for healing. Dennis found comfort in God Word’s and he believed that God would grant his wife the miracle of healing.

As Dennis sat there in that traffic jam, now late for his meeting with the doctors, a large, plain, white tractor-trailer rig slowly passed by on the left. Inscribed on the back doors of the trailer were the words to Jeremiah 29:11. He was familiar with that verse of scripture. God had comforted him with that very verse many times before. Dennis knew it by heart: “’For I know the plans I have for you,’ declares the Lord, ‘plans to prosper you and not to harm you, plans to give you hope and a future.’” He felt God’s peace descend over him. He felt a new peace about his wife’s medical condition that he had not felt before. Dennis knew that God was in control of the situation and that He would provide for his wife’s healing as He had promised him so many times during the last several months.

Only a few days after this incident in traffic, the illness claimed his wife’s life. She was only 43 years old. Dennis now realized that God had kept His promise to him but in a much different way than he expected. God cannot lie. God faithfully keeps His promises. Dennis had failed to understand God’s will in this situation. In his grief, Dennis had failed to see God’s mercy. God had healed his wife. He had given her the ultimate healing in Jesus Christ.

Three years earlier, Rose was moving her family to a new city and a new job – a family consisting of two young adopted children and a husband confined to a wheelchair with Muscular Dystrophy. During the trip, in a motel room far from home, Rose’s beloved husband lost his battle with this dreadful disease. Alone, distraught, and far from family and friends, she cried out to God in her grief. Pouring over her Bible for something to ease the pain, God gave Rose Jeremiah 29:11 to show His love and concern for her and her fatherless children. God had a plan amidst all the suffering and pain.

As Rose struggled to build a new life with her two young children, she clung to Jeremiah 29:11 day after day. God’s promise for hope and a future sustained her through the depths of grief, through job changes and through another cross-country move, this time to New Jersey. In time, Rose recognized that her husband had been completely healed, but not in the way she had expected.

During the summer of 2001, both Dennis and Rose were given a “reason for hope” when they discovered Ave Maria Singles.

Dennis heard about Ave Maria Singles on a Catholic radio interview with its founder, Anthony Buono. He was intrigued by the many success stories of committed Catholics meeting their spouses online. It wasn’t until October that Dennis mustered enough courage (at the strong urging of his daughter) to join and fill out the profile. Here is what he wrote:

If you are not looking for a faithful, godly and devoted family man, no need to respond. I like to laugh and play with children. Family comes first after God and His church. I work for a ministry that heals the marriages of those that have suffered separation and divorce. I want to make a radical gift of myself in sacrificial love for my future spouse. There is no greater calling for a man than to be the servant-leader of his family, putting their needs before his own. Man will never realize his true reason for being until he makes a sacrificial gift of himself for someone else’s benefit. My deepest desire is that the Lord will use me in this way to be a blessing to my wife.

As soon as Dennis posted his profile, the e-mail messages started rolling in. But it was Rose’s profile that really touched his heart. Despite the attraction, Dennis began dating a local woman that he met on the site.

Rose had been about to give up on the “dating game” when she stumbled onto Ave Maria Singles in June 2001. Although she had seen other websites for single Catholics, Ave Maria Singles was refreshingly orthodox and thorough in its approach. And she was intrigued by the site’s slogan: “Reason for Hope.” Listing Jeremiah 29:11 as her favorite Scripture verse, Rose filled out the profile:

Instant Family…Now available in a limited quantity and exclusively through Ave Maria Singles. This package is ideal for a faithful Catholic man yearning for a family. It comes complete with a loving, faithful Catholic woman and two loving, obedient (usually) children (Mary, 11, and Joey, 10). Also included are two cats (Simon and Attie), two parakeets (Terry and Sunshine) and one mildly neurotic dog (Woody). This family is highly active in sports and outdoor activities, as well as interested in travel, music and art. Warning: When mixed with love and prayers, this family will grow and blossom, perhaps challenging you to grow in ways you never thought possible. Seriously, I am a happy, healthy Catholic woman and mother of two precious children who were adopted from Siberia. I work hard, enjoy exercising, music, art, nature, cooking and gardening. But nothing compares with spending time with the Lord and the people I love. I am deeply committed to the teachings of the Catholic Church and rearing my children in the faith.

Rose was thrilled to discover several men who met her criteria, which included praying the rosary. But she became discouraged because many of the men didn’t want to date a woman so far away or who already had children. Rose did go out with a couple of local men, but it was not unusual for her to cry all the way home. Despite the disappointment, she persevered.

Late in the fall, Rose began communicating with Dennis and she felt they had a great deal in common. At that time, however, she had just started dating another gentleman from the Ave Maria Singles site.

Dennis and Rose were now dating other people. Both relationships ended in April 2002. Little did they know at the time that God’s hand was in the breakup of their relationships. Rose reactivated her profile at Ave Maria Singles and searched for Dennis but was disappointed to find his profile was inactive. Dennis started to pray the rosary every day, asking the Blessed Mother to intercede for him to find a godly, faith-filled Catholic woman with whom to share his life. Finally, on May 11, 2002, after much anguish and many tearful prayers, Dennis reactivated his profile. He searched for Rose’s profile and, to his surprise and delight, it popped up. He was struck once again by Rose’s favorite Scripture verse, Jeremiah 29:11. He quickly composed a short note and sent it off. Within hours, Rose replied.

It was not long before they knew in their hearts that God’s plan for them was marriage. Since they lived nearly six hundred miles apart, Dennis and Rose courted the old-fashioned way, through the written word; the only difference was that they could exchange the words rapidly through e-mail messages. They quickly discovered that sharing feelings through writing was an excellent way to get to know each other’s heart without the temptations associated with the physical side of a relationship.

Two weeks later, after what seemed like an eternity of communicating by e-mail, Dennis called Rose for the first time. The conversation started at midnight and lasted more than three hours. Communicating through the written word was great, but being able to hear each other’s voice was even better. The ability to pray together added a new dimension to their relationship. Soon their nightly telephone “dates” evolved into several calls each day.

Dennis and Rose’s first face-to-face meeting took place on July 12, nearly two months after they began communicating via e-mail. Dennis flew to New Jersey and Rose met him at the airport. They were so caught up in meeting each other for the first time that they didn’t realize they were at the wrong baggage claim area. When they finally found the correct claim area, Dennis’ suitcase was the only one on the carousel.

Less than 24 hours later, on a starlit summer night, Dennis asked Rose to marry him.

A month later, Rose and her two children flew to Michigan to meet Dennis’ daughter, son-in-law, and three-year-old grandson. Their soon-to-be “blended” family interacted amazingly well. The wedding plans hinged on finding a Catholic school for Mary and Joey in Michigan. Much to their disappointment and frustration, none of the schools they contacted had openings.

Three weeks later, and without a wedding date, Dennis and Rose attended a marriage preparation weekend at the St. John Center in Plymouth, Michigan. Printed on the cover of the course materials was Jeremiah 29:11, yet another confirmation that God did indeed have plans to give them hope and a future.

God used the marriage preparation weekend to answer their prayers for a school. One of the presenting couples told them about a school with an outstanding spiritual and academic reputation. Mary and Joey were accepted into this school on September 5. Seven days later, Rose put her house on the market, packed up the kids, the cats, the mildly neurotic dog, and a few clothes and drove to Michigan.

Mary and Joey started school on September 13. Rose accepted an offer on her house on September 15, returned to New Jersey on October 10, gave her attorney power to close the deal on the house, supervised the packing and loading of her household goods, and drove back to Michigan.

They were married on December 13, 2002, exactly five months from the day Dennis proposed.

Our love for each other is a testimony of God’s faithfulness in keeping His promises. God has taken the broken pieces of our lives, forming and shaping us into a beautiful mosaic. As a reminder of all that God has done for us, we had our wedding bands engraved with “Jer 29:11.”

P.S. The Calling Couples to Christ blog will be taking next week off as we celebrate our 13th anniversary!