The well-being of the individual person and of human and Christian society is intimately linked with the healthy condition of that community produced by marriage and family.[i]

Pope Paul VI issued this prophetic message in the Vatican II document, Pastoral Constitution on the Church in the Modern World (Gaudium et Spes), on December 7, 1965. At a time when the world was fraught with rapid change and traditional values were being questioned, and often jettisoned as being “old fashioned,” the Church offered its service to guide humanity to true meaning and happiness. The divorce rate was rapidly rising, greater numbers of children were born out of wedlock and traditional family life and moral values were under attack. Fifty years later the assault on families has escalated, leaving broken children and parents in its wake.

Marriage and family life are in crisis. The traditional family – one man, one woman, married for life – is no longer the norm. Since 1970, the number of Americans living together outside the bond of marriage has increased more than 1000 percent, now comprising 10 percent of all couples.[ii] Cohabitating couples that eventually marry have a shocking divorce rate of 80 percent; thus dispelling the popular notion that living together prior to marriage helps the couple to know each other better.[iii] In the U.S., it is estimated that the breakup rate of cohabitating couples is five times higher than that of married couples.[iv]

Divorce not only separates a couple, it fractures the family as evidenced by the growing number of single-parent homes. Increasingly, children are living only with their mothers, up from less than one in 10 in 1960 to more than one in five today.[v] At the same time, seven in 10 mothers with children under age 18 are in the labor force, leaving the majority of children alone in a culture that promotes violence, early sexual behavior and drug use to numb the pain of being home alone.[vi]

The marriage covenant, by which a man and a woman establish between themselves a partnership of their whole life, and which of its own very nature is ordered to the well-being of the spouses and to the procreation and upbringing of children, has, between the baptized, been raised by Christ the Lord to the dignity of a sacrament.[vii]

According to the Catholic Church, marriage is:

Marriage is Created by God

God himself is the author of marriage. God created man out of love and in His image. Marriage is not of human origin but is governed by the commands of God.

So the LORD God cast a deep sleep on the man, and while he was asleep, he took out one of his ribs and closed up its place with flesh. The LORD God then built up into a woman the rib that he had taken from the man. When he brought her to the man, the man said: “This one, at last, is bone of my bones and flesh of my flesh; This one shall be called ‘woman,’ for out of ‘her man’ this one has been taken.” That is why a man leaves his father and mother and clings to his wife, and the two of them become one body.[viii]

Criticism of Catholic teaching on marriage often focuses on St. Paul’s letter to the Church at Ephesus, where he says, “Wives should be subordinate to their husbands.” This quote, taken out of context, is used as evidence that the Catholic Church is out of touch in a society that promotes the independence of women. Reading the text in its full context shows the true dignity of woman in the marriage covenant:

The verse prior to the disputed claim of St. Paul exhorts both husbands and wives to be subordinate to each other out of reverence for Christ. This is a partnership of equals, which is so beautifully illustrated in Michelangelo’s Creation of Eve shown below. 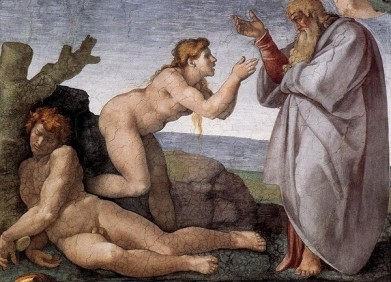 Creation of Eve by Michelangelo

Having created Eve from Adam’s side and not from his feet, God intends for the woman to be a co-equal with man in dignity and respect. She is the most suitable helpmate for man. None of the beasts of the earth, the fish of the sea or the birds of the air, proved to be a suitable partner for man.

The LORD God said: “It is not good for the man to be alone. I will make a suitable partner for him.” So the LORD God formed out of the ground various wild animals and various birds of the air, and he brought them to the man to see what he would call them; whatever the man called each of them would be its name. The man gave names to all the cattle, all the birds of the air, and all the wild animals; but none proved to be the suitable partner for the man.[x]

Without a suitable partner for man, God said, “It is not good.” Woman completes man in a way that nothing else in all of creation can. Being created in the image and likeness of God, both man and woman in union with the Father are an image of the Holy Trinity.

In the Catholic context, spouses have the duty to first develop their relationship with God. Participation in the Sacraments, especially the Eucharist, provides the couple with the grace needed to live out their vocation to marriage. In the illustration below, the triangle represents the marriage covenant between the spouses and God, an image of the Holy Trinity, Father, Son and Holy Spirit.

Couple’s Relationship to God and Each Other

As the couples move closer in their respective relationship to God, they grow closer to each other (shown below). God pours His love and grace on each of the spouses, who in turn, have the resources needed to make a total gift of self to each other. 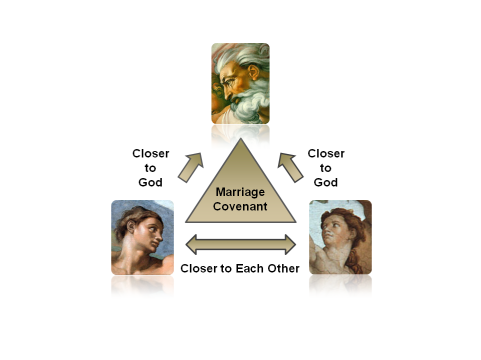 Marriage is a symbol of Christ’s unbreakable love for His bride, the Church. Again looking at St. Paul’s letter to the Church at Ephesus, this mystery is brought to light.

So (also) husbands should love their wives as their own bodies. He who loves his wife loves himself. For no one hates his own flesh but rather nourishes and cherishes it, even as Christ does the church, because we are members of his body. “For this reason a man shall leave (his) father and (his) mother and be joined to his wife, and the two shall become one flesh.” This is a great mystery, but I speak in reference to Christ and the church.[xi]

Next week we will look at marriage from the aspect of being a lifelong covenant, ordered to procreation, and raised to the level of a sacrament by Christ. We will also examine the argument for following the Church’s teaching on marriage.

[ii] David Popenoe and Barbara Dafoe Whitehead, The State of Our Unions: The Social Health of Marriage in American, 2007 (New Brunswick, NJ: The National Marriage Project at Rutgers University, 2007) p.19

[iv] Georgina Binstock and A. Thornton, Separations, Reconciliations and Living Apart in Cohabiting and Martial Unions, Journal of Marriage and Family 65 (2003): p. 432-443